I have heard it said that a problem or trouble shared with another cuts the pain in half and makes life a bit lighter. What brought this on is a long-standing group of war pictures of stark clarity, from World War II, that won't leave me. There were four, now there are three, and since I put one on paper, that remedy has worked, so I now plan to do the others.

It was early on in the war, Stalingrad was under attack, in bitter cold winter weather, city people fleeing by the hundreds, just in the clothes they wore, In the "news reels" in the movie houses we saw the war stories. This picture I've remembered for sixty years, was of a young mother, lying in the snow on her back, holding up her small baby, so it wouldn't be in the snow, both of them frozen solid. I cried for these two. War is such a cruel job. I hope this helps me. Very sad story. What a trophy of war.

I searched and searched but could not find that photo online, but I did find many photos of the siege of Stalingrad. This photo shows several children frozen to death. 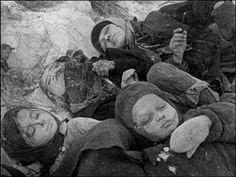