Smoke is funny stuff, smoke is and has volume, density, color content, but you cannot hold it. It comes in many colors, it can be fun or disaster. Usually it has an odor, and if near, at any time, causes concern, fear, or laughter. If you have ever been in a house or other building where a fire has begun, you know the feeling of fear. Escape is the only thing on your mind. Fire is the root of all smoke, and where there is smoke, somewhere low-down, or in the soil, smolders warm, soon to erupt, smoke from flames. It might take hours or days, as long as it gets oxygen, smoke lets us know a fire is brewing. So if you see smoke in the woods, phone 911.

Fun fire is usually at a BBQ or a bonfire, and we enjoy the smoke from these because of friendships with others. Also smoke is pleasant when burning autumn leaves and dead wood. Smoke is or was used eons ago, by Native people and others, for signals between tribes and countries. People love to see smoke when they smoke cigarettes, cigars and pipes. So there you have it. Did you ever think of all the kinds of smoke?

For years I enjoyed bonfires and campfires. When I was a child, Letty and my father made a bonfire in the fall, after the vegetables were harvested, on the earth. Friends and neighbors came, and that is where I learned to roast marshmallows. Then, when I was raising my own children, we loved sitting around a campfire, singing and (of course) roasting marshmallows. The photo below is me around 1991 or 1992, camping near Port Hardy, British Columbia. No smoke, but you can see the flames on our campfire. 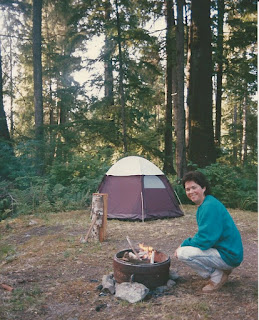